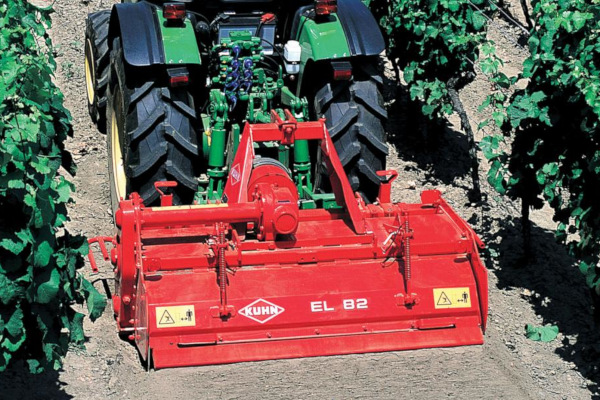 Kuhn EL 62-180 power tillers have been designed with versatility and durability for vineyard, market garden, horticulture, and nursery operators. Its compact design allows the operator to till in vineyards and orchards, without damaging plants or trees.

Unlike chain-type gearboxes, the rotor on this machine is driven by heat-treated gears in a permanent oil bath, making it nearly maintenance free and very reliable. “C” blades, equipped on the rotor, aggressively chop soil and plants with minimum horsepower. The rigid box construction acts as counteraction to shocks and vibrations. Three adaptable yokes allow the tiller to be offset to the right to cover wheel tracks or maneuver around trees and other obstacles. The rear hood is adjustable to match soil conditions and acts in soil leveling for smooth seedbeds.

On the larger EL models the rotor is driven by case hardened, forged steel gears, which are mounted on conical or double row roller bearings for maximum capacity. They run in an oil bath. The heavy-duty sealing of the lower gearcase is fitted with a metallic face seal, which provides the highest possible resistance to leaking and contamination in abrasive soil conditions.

On the bigger models, the central gearbox is cast iron and set back for reduced PTO angles. A friction slip clutch is standard for protection of the drivetrain. The EL 62 Duplex gearbox offers two speeds by inverting the gears. The Duplex gearbox with two speeds is standard on the EL 92. Two additional speeds are available as optional equipment, offering the adaptation capability to various working conditions.

TThe PTO cross and yoke and protective shear bolt are easily accessible. Access to grease the PTO cross is accomplished by loosening a few wing nuts and pulling the guard forward.

The special curved design of the Kuhn tiller “C” blades has been optimized, tested and provides chopping and mixing of plant residues, aggressive entry into hard soil while requiring less horsepower and increased crumbling of soil clouds. The EL series is fitted with six blades per flange as standard for efficient crumbling. For shallow work, L-blades can be fitted on the machine.

On all models, working depth is controlled by using skids or wheels. On the EL 82 and EL 92, rollers are available as an option. Crumbler rollers with a large diameter of 15” with removable bars or Packer rollers with a diameter of 19” are recommended for very wet conditions or clayey soils.