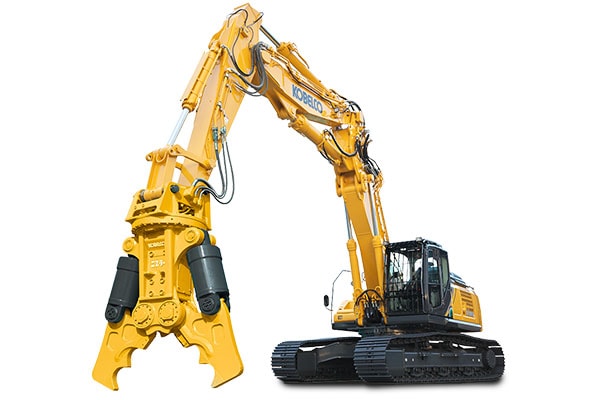 With a reach of up to almost 70', the Kobelco SK350DLC-10 demolition machine can make light work of tall buildings. It's system simplifies assembly/disassembly for easy setup and teardown. Side-mounted hydraulic piping can be attached at ground level for ease and safety, while the attachment height during transport is a mere 6' 7". With highly durable construction, industry-leading fuel efficiency and Kobelco standard features, such as no limit power boost and premier operator comforts, your productivity will take a massive leap upward.

NEXT attachment
The new-generation NEXT demolition attachment for the demolition machine with common use type main boom was designed by KOBELCO without being limited by existing concepts. Each boom attachment has a block structure that simplifies assembly/disassembly and transport, and the attachments employ our original NEXT joint system. The piping can be connected at ground level, and the steps for attachment assembly/disassembly from pressure release to pin fixing can be completed safely in a short time.

NEXT joint system
KOBELCO's original joint system was developed by testing the assembly/disassembly process extensively. The boom attachment can be connected just by hooking the upper (backside) pin and fixing with the split pins on the lower side (bottom side).

Side-mounted hydraulic piping
All attachment joints have the hydraulic piping mounted on the side, adopting a quick-coupler system for connecting sections. There is no need to climb up the back of attachments when connecting or detaching piping, and all steps can be performed quickly and safely from the ground.

Fuel consumption mode
A function is provided for switching modes to prioritize fuel consumption depending on the work content. Modes can be switched while using any front attachment including the nibbler, breaker, or bucket.

New cab interference prevention system
The cab interference prevention system is equipped as the standard, which sounds an alarm and stops the machine automatically when the front attachment comes close to the cab during operations. Because current positions can be detected with high accuracy, the attachment can be moved at close range near the cab, resulting in increased work ranges at the foot area for the separate boom specification as well. Operations can be conducted more smoothly while also ensuring the operator's safety.

Tip-over warning device with vertical/lateral judgment
The working radius and stability are calculated from the position of the attachment, and the operator is warned with a buzzer (continuous sound) when the attachment moves to a working range where the machine could tip over.